These past few months, I’ve been attempting a sort of writing experiment.  It’s one that’s working okay, but not as well as I’d like it to.

I’ve been attempting to write two books at once.

I’m sure some authors can pull it off.  After all, how else do they get so many books out there in so short a time?  For me, however, I feel like I’m only giving each book 50% when each book deserves 100%.

One, of course, is the third Cemetery Tours book.  That one is my priority.  After all, it’s part of a series, I know readers enjoyed the first two books and are waiting for the next one, and it’s full of characters that I know.

The new book I’m writing is a bit more complicated.  It’s YA.  It has several new characters, all of whom seem to have secrets that I don’t even know yet.  It’s mythology as opposed to paranormal.  There’s just a lot going on.  I know I’m capable of writing it, but I think it will take more time that I’d originally planned.  I was hoping that I could jot it out in six months and have it available in less than a year.  I just don’t think that’s going to be the case.  I want to do this story justice, and in order to do so, I might have to give it time to evolve.

On the other hand, I don’t want to wait too long to get these stories out because I have no less than a dozen other stories that I eventually want to get written.  They’re all out on paper (and on secret Pinterest boards), but I don’t want to let any of them go to waste.

A few years back, my sister and I went to see Josh Groban in concert.  It was pretty much the best concert ever.  We had floor seats and we were fairly close to him.

How close you may ask? 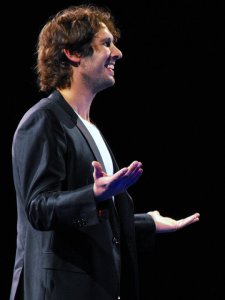 Anyway, at this concert, he had fans text in questions and throughout the show, he would answer them.  One question was the age old, “What advice would you give to aspiring singers?”

Josh gave an astounding answer.  I don’t remember it word for word, but it was something along the lines of, “Never stop learning, never stop being a student.  No matter how far you go, or how successful you become, always be willing to learn something new.  Be humble and be gracious.”

I thought that was just awesome, and it’s something I’ve tried to remember and keep in mind in this past year.  Tomorrow is the one year anniversary of Cemetery Tours release! How cool is that?!

On that note, I’m off to go make my book a birthday card.  Talk to y’all later!