I’m going a little against my usual schedule and writing a blog post at night, but it’s a post I need to write, more for my benefit than my readers’, really.  It’s just been one of those days that has left me with thoughts that need to be organized and a brain that needs to be de-cluttered.

Today, I went with my dad to the eye doctor.  Long story short, his eyesight is godawful.  He’s had cornea transplants in each eye and couldn’t fully see me until i was six years old.  I could try to list all the problems he has (that I may or may not inherit… great), but I would fail.  Just know that his vision is as bad as it could possibly get without him actually being blind. 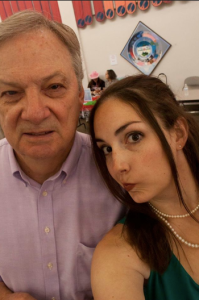 So last week, my dad started having this weird blurry hole directly in his line of vision.  The way he described it made it sound a heck of a lot like a progressive disease called Macular Degeneration, which would eventually lead to total blindness.

Thankfully, after about eight hours at two separate eye care facilities, we found out that is not the case.  He simply as a hole in his retina.  Ironically, this hole in his retina has absolutely NOTHING to do with his craptastic vision.  It’s just one of those things that can’t be prevented and that can totally happen to anyone, even someone with perfect eyesight.

Unfortunately, the treatment for this condition is surgery.  Not a big one, but he will be in recovery for about five days.  All things considered, things could be a lot, a LOT worse, and I’m thankful that they’re not.

On the book front, I’ve run into some formatting issues with the Kindle version of Boy Band and will probably be re-uploading it here in the next few days.  I hate to take if off sale for even a day since it’s been doing so well (THANK YOU ALL!), but I also want it to look professional.

Aside from all that, I have dozens of errands I need to run within the next few days, all the while hoping and praying that Boy Band is as well received as Cemetery Tours has been.  It’s so different.  It’s intended for a different audience.  But I do love it.  And I hope readers love it too.

Love to you all.