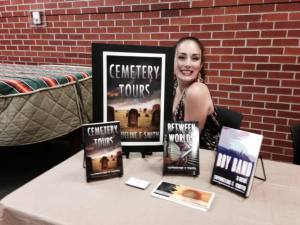 SoSI have been waiting, despite my excitement , to write about my first Authorfest, which was held in Denison, Texas and put together by James Peercy and his wife, Claudette.

This was a Friday through Saturday afternoon event in which authors have a chance to show off their books, read to a group of folks and generally get out and about among other people.  I just reread that sentence. It makes it sound like authors hole up somewhere with their computers in the dark, writing away! Well, I digress a bit.

The part that was most fun was seeing everyone dressed up as a character in their book. Because my wonderful illustrator imagined me with pink hair, it was for this event! I’ve had a lot of compliments, comments and stares with it. I must admit I like it!

I’ve been trying to sort out what…