It is officially April 1.  I hope everyone has avoided being pranked and fooled and whatnot.  I’m not really even trying this year, because I feel like everyone is expecting it.  However, as it is the beginning of the month that my new Young Adult novel, Boy Band will be released, I figured I should celebrate with some useless trivia and a Chapter 1 download!

So, in no particular order, here we go!

* Boy Band started out as a NaNoWriMo project.  I’d never participated in NaNo before and I really had no intention to.  I didn’t like the idea of being timed or of writing a novel just because it was a certain month.  But a friend of mine, Savannah (http://savannahrohleder.blogspot.com), persuaded me.  I had no idea if I would publish the story, or if I would even finish it.  But I ended up loving it.  It just goes to show that you never know until you take a chance on something.

* My sister and I both LOVE boy bands, all boy bands, and countless hours spent watching music videos on YouTube inspired me to write about them.

*You can find the music that inspired Boy Band here: https://jackiesmith114.wordpress.com/2015/03/19/boy-band-soundtrack/

* My sister and I wrote all the “songs” in the book.  I’m not sure if they’re good or not.  The one she wrote is, but the rest… Well, I guess you’ll just have to let me know.

* This is the first book for which I’ve designed the cover, and I loved it!

* My sister took the picture of New York that I used for the cover image.

* Oliver Berkley is based on our cute tour guide from Scotland.  That might be a little creepy.  Oh well.

* The cute Irish singer that Mel refers to throughout the book was inspired by Niall Horan.

* I mention Zac Hanson in the book because he was my very first musician crush.  I was 9 years old and I was obsessed with Hanson.

* I mention Meg Cabot because she is my ultimate writing inspiration.  I kind of want to be her.

* Both of my editors got really mad at me for the way the book ended.  Yes, okay, it ends on a bit of a cliff-hanger.  THERE WILL BE A SECOND BOOK!  In fact, there’s going to be a third book too.

* The group is from the Bay Area because I think San Francisco is really cool.

* I wrote Mel to look like my sister.  Really, this book is for her.  She’s my best friend in the world and without her, the book wouldn’t exist.

This weekend, I had my very fist spa experience.  It was a friend’s birthday and so a group of us went to celebrate with her.  I had no idea what to expect, but my friend told me that there was an indoor swimming pool with a bar.  Sold.  It’s like, I don’t even care what else this spa has to offer me.

As it turned out, when you get to the spa, you are given a uniform that you’re supposed to wear while you’re there.  It was actually really comfortable, despite being a rather unflattering shade of orange. But since we were heading straight for the pools, we just wore our bathing suits.

The pools were awesome, full of jets and streams and illuminated this amazing shade of turquoise that made me feel like I was in a fantasy novel.  There was also an indoor water slide, which is meant for kids, but when you’ve got five twenty-somethings who, you know, enjoy the finer things in life (like bars in indoor swimming pools), you’ve got to ride the water slide.  That’s just all there is to it.

There are still lessons to be learned, however, even when you are in your mid-late twenties.  For example, stranger danger is still totally a thing.  Don’t talk to strangers.  Just don’t do it.  Especially in a spa where there’s alcohol.  Also, don’t leave your new boyfriend alone with your best friends.  That’s one my friend Kit Kat learned the hard way.  While she and the birthday girl went off to get pampered, she left her boyfriend alone with me and our friend, Roxanne.  We basically gave him what was probably the longest girl talk of his life.  We told him all about our bad dating experiences in the past and gave him a run down of what not to do.  I’m not sure if he was amused or scared.  Probably a little of both.  He seems like a cool guy though, so he probably wasn’t too scarred for life.  He also has his own LED lighting business!  Check it out:

After we finally left the pools (after about six hours), we went to the sauna.  Apparently, people go into the saunas to relax, but we’re a pretty social group and we like to talk.  I would therefore like to issue a formal apology to everyone in the saunas whom we disturbed with our chatter.  I’m sorry.  I hope we didn’t ruin your evening.

All in all, my first spa experience was a pretty positive one.

The next day, I went on a Downtown adventure to the Dallas World Aquarium and Spaghetti Warehouse with a friend I’ve met only recently, but who is lot of fun and very easy to talk to.  It was a great day.  Very uncharacteristically, however, I forgot my camera at home!  I did get this shot of Downtown Dallas on my iPhone, however… 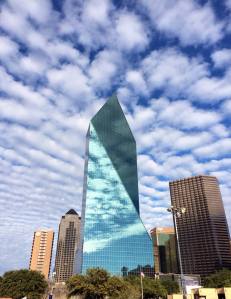 Finally, I was tagged in a Facebook post asking me to list seven things that people may not know about me.  I was tagged by my author friends Ben Ditmars (https://benjaminditmars.wordpress.com) and Melissa Zaroski (http://davenportmanor.net).  I’m kind of an open book, so I’m not sure if there’s a whole lot that people don’t know about me, but I’ll give it a go.

2.  I hate talking on the telephone.

3.  When I first learned to ride a bicycle, my dad promised me two doughnuts if I rode around the block without crashing my bike. I did. But I never saw those two doughnuts.

4.  I enjoy playing chess.  I’m not good at it, but I have fun. I’m not a competitive person at all.

7.  My favorite necklace is one that my grandmother gave me. She called me into her room one night when I was about five or six and told me to reach into a bag she was holding.  Anything I pulled out, she said, was mine.  I pulled out the necklace.  To this day, it is my most treasured possession.

If you’re reading this, I tag you!

As I have mentioned on this blog several times before, I am in the midst of writing the first draft of the Cemetery Tours sequel.  In fact, I am almost halfway done with the manuscript.  Tonight I thought, just for fun, that I’d write down a few facts about the book!

2) I’m not releasing the name until I have it registered with Bowker.  I’m hoping that will be sometime in the early months of 2014.

3) Unlike Cemetery Tours, which takes place mostly in Dallas and the surrounding area, most of the sequel will take place in a different state.

4) Brink wasn’t going to play as big a role in this book.  However, after everyone told me that he was their favorite character and that they wanted more of him, I decided to include him on the adventure.  I’m glad I did.  He’s a lot of fun to write.

5) There’s one particular scene that I haven’t written yet, but I’m pretty sure that when I do write it, I’ll cry.

I’m stopping here because I don’t want to give too much away, other than I’m really enjoying writing this one and I hope it makes a worthy companion to Cemetery Tours.