Tonight, I’ll be attending a NaNoWriMo kick starter event at a local library.  A friend of mine is presenting and the event is open to anyone who is thinking about participating in NaNoWriMo, as well as those who have participated in the past.  As y’all know, Boy Band started out as a NaNoWriMo project and has received such positive feedback that I’m planning on releasing the sequel in just a few short months.  It goes without saying that I am a big supporter of NaNoWriMo.

But you know, all this talk about writing seminars reminds has started taking me back to my own days in college, when I was just figuring out that I wanted to write.  Really write.  I remember Meg Cabot (one of my writing idols) advising young aspiring authors NOT to take any writing classes.  She claimed that studying something would instantly kill any and all love you once held for it.  To an extent, I found this to be true.

I won’t waste too much time talking about the classes I didn’t enjoy.  One of them was screenplay writing. I think I would have really enjoyed it had it not been for my instructor.  He was a bitter, failed novelist and he made it no secret that he did not give two flying flips what we learned in that class, if anything.  The other was a short story class.  My final story was nothing exceptional, although I can’t help but remember it was about ghosts and demons and things that went bump in the night.  It seems I’ve always harbored that dark fascination.

The writing class that I really, truly enjoyed was a poetry class, which is funny, because I am a truly terrible poet.  That’s probably why I enjoyed the class, though.  Because I was learning something new.  I’ve written a grand total of three poems that I’m actually proud of.  Two of which are here.  The third is about killing a cockroach in New Braunfels.

Perhaps my favorite class of all, however, was children’s literature.  Even though it technically wasn’t a writing class, we all had to come up with our own final project to present at the end of the semester.  I decided to write and illustrate my own children’s book.  I’m actually quite tempted to upload it and share it with you here.  I’m pretty proud of it, even though the illustrations and the book itself leave much to be desired.  Still, I’ll never forget standing up in front of the class to show off the book.  My classmates were bewildered that I’d gone with writing a children’s book over writing a paper. One girl actually asked me, “Why would you do that?!” I guess to them, writing a paper was a lot less work, and it probably was.  But to me, writing a book was a lot more fun.  And it still is. 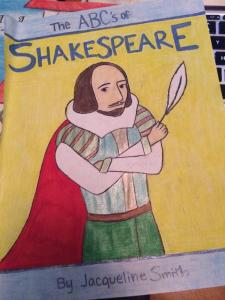