Okay, I’m going to get real serious with y’all. I hate bugs. Not all bugs. Butterflies and dragonflies are lovely. But the really gross kind? The roaches and the leaf bugs and the cicadas? Nope.

Locusts are right up there with the worst. This is not a matter of opinion. If we go back to Biblical times, we will notice that there was not a plague of butterflies or a plague of ladybugs. There was a plague of LOCUSTS. LOCUSTS are a PLAGUE. THEY ARE DISGUSTING. JUST LOOK AT THEM. 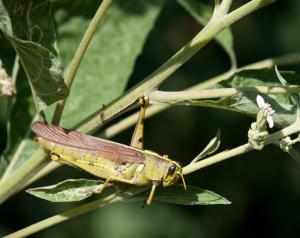 This evening, as I took a delightful walk around the park, I was thinking about everything I have to look forward to: the beach, book signings, new books, etc… when all of a sudden… A LOCUST LANDED ON MY SHOULDER. I WAS NOT HAPPY. I was even wearing bug-spray to deter mosquitoes who delight in feasting on my apparently delicious blood, but there was no deterring that locust!

After I heroically fought him off (read: screamed, slapped him off my shoulder, and ran away), ANOTHER locust dive-bombed me from a tree! I had to fight off no less than SEVEN locusts on what was supposed to be a pleasant evening stroll.

As miserable as that experience was, however, it was nothing compared to what may have been the most traumatizing night of my entire life.

The year was 1999. I was eleven years old and I was out at the Rangers Ballpark in Arlington with my friend Bobby and our dads. We all loved going to baseball games. It was one of our favorite summer activities.

That night, we were playing Tampa Bay. It started off like a normal baseball game. We watched batting practice, ate hot dogs and french fries, and cheered our lungs out for the Rangers.

There were always a few bugs flying around the giant lights of the stadium, but they rarely ever bothered us. I usually didn’t even notice them. I was too fixated on the game.

If this was fiction, I would say that the crickets started swarming slowly, with one or two strays hopping around at our feet. But this isn’t fiction. This is real life.

Without any sort of warning whatsoever, crickets began falling from the sky. One moment, the sky was clear. The next, it was literally raining crickets. It was like an air raid of locusts. I was freaking out. One landed on my arm, one dive-bombed my dad’s drink. They were crunching beneath our feet and flying past my ears. After only a few minutes, I sought refuge inside the halls of the stadium, but one glance at the cricket-blackened walls told me I would find no sanctuary there. My only hope was the safety of the car, and ultimately, my home.

Dodging crickets, I ran back to my dad and begged him to take me home. He refused. He, like everyone else in the stadium, seemed totally unbothered by the onslaught of crickets. I didn’t understand why no one else was going absolutely out of their minds trying to shield themselves from the hoards of locusts. Where was their sanity? Did these people have no survival instincts whatsoever?

Upon realizing I was completely alone in my plight, I began to hyperventilate. It would go down as the one time in my life my dad has disappointed me as a father. There I was, panicking and dangerously close to passing out from sheer and utter terror, and he was sipping his cricket-fouled beer and watching the game! Like nothing was going on!

I’m not sure how long I sat there, waiting for the game to end, while the crickets continued to rain down on us, but finally, finally, my dad said that we could go home. I leapt up and clung to him, certain that with his height and strength, he could protect me from any bugs that may have threatened.

That was until a man tapped him on the shoulder and said, “Sir? You have a cricket on your collar.”

Walking through the parking lot that night was it’s own special form of torture. With every step I took, I heard a sickening crunch of multiple crickets under my soles. It is a sound that has stayed with me to this day. I will never forget. And I will never fully recover.

If you’d asked me a few years ago who my hero was, I would have been honest with you and said, “I don’t really have one.”

It wasn’t that I didn’t believe in heroes.  I can think of several heroes; firefighters, teachers, mothers, doctors, pilots, etc… I just honestly could never think of someone that really moved or inspired me enough to call them my hero.

Then Josh Hamilton came along.

I’d always been a huge Rangers fan.  Ever since my Daddy first started taking me to games when I was nine years old, they were the only sports team I ever loved, even through the not-so-great years.  My first game ever, Rusty Greer hit a grand slam against the New York Yankees.  I was there when we won the 1999 West Division Championship.  I have a baseball signed by Juan Gonzales.  I.  Love.  The.  Texas.  Rangers.

When I first heard Josh Hamilton’s story, I knew I had finally found the hero I’d been missing. Not only did he play for the best sports team ever (the Rangers), he was very open about his love, not only for his family, but for Christ, and he’d overcome his struggles with addiction and substance abuse to become one of the finest hitters in Rangers – no – in baseball history. This guy was the real deal, a living legend.  Even though I’d never met him, I’ll never forget how proud I felt when, after one particularly awesome home run, one of the announcers stated, “The best hitter in baseball shows you why he’s the best hitter in baseball.”

No doubt about it; having Josh Hamilton play for your team was definitely something to brag about.

Unfortunately, when you turn someone into a hero, it only hurts that much worse when they disappoint you.  And that’s not their fault.  All heroes are human.  No human is perfect.

Josh Hamilton has had a pretty disappointing year.  From his complacent attitude and lack of effort at the end of last season, to signing with our known rivals, to the “Not a Baseball Town” debacle, it’s easy to see why his former fan base wasn’t exactly thrilled to see him make his grand return to The Ballpark in Arlington.

I’ll be the first to admit his remarks about Texas, the Rangers, and the fans ticked me off.  We loved Josh Hamilton.  We cheered for him.  We supported him through everything.  He was our hometown hero.  I’m not at all surprised that, upon his return to Texas, the fans booed him.  If I had been there, I probably would have been right there with them.

That being said, I think Rangers fans went too far.  I’ve read reports that fans said ugly things to his wife and children.  The abuse was so nasty that she had to call security.  I saw signs that taunted Josh for his alcohol and drug history.  Rangers fans chanted “Crack-Head” from the stands.

I understand booing Josh for the hurtful remarks about his former fans and for, come on, signing with the Angels, the one team in the world that Texans despise more than the New York Yankees.  Any former Ranger who signs with the Angels should expect to be booed.  Like I said, I would have been booing too.

But the attacks on his family and on his personal demons?  That’s going too far.  And maybe I’m a hypocrite for saying this.  It does kind of sound like I’m saying “This kind of jeering and abuse is okay, but the other is bad.  Don’t do it.”  But the world of baseball is a little different than the real world.  In baseball, opposing teams expect to be booed.  I’ve booed the Tigers, the Yankees, the Angels, the Oakland Athletics, Albert Pujols, Miguel Cabrera, CJ Wilson, Mike Trout, just to name a few.  If I ever met David Freese, you can bet I’d boo him for stealing the World Series from us (but I’d probably apologize, because, unfortunately, he is really cute).  Usually, booing someone in baseball isn’t personal.  But with Josh Hamilton, it is.  That would have been hard enough without the personal attacks on his family, on his little girls who were just there to support their Daddy, and the taunts about his past.

Before this series, I wanted nothing more than to see Josh Hamilton fail at the plate.  I have to admit, I’m thrilled that the Rangers won two of the three games, and ultimately, this series, against the Angels.  But instead of feeling like justice was served, that Josh got what he deserved, all I feel for my former hero is pity.

I hope for peace, both for him and his family, and I hope that the next time he plays here, the fans are at least a little more merciful.

On that note, I hope the Angels fail miserably.