This past Friday, July 17, was the eight-year anniversary of my sister’s spinal implant surgery.  In 2007, she underwent an operation to fix her very advanced, very aggressive case of scoliosis.  Although she’ll never admit it, I actually think she’s a better writer than I am.  That’s why I asked her if she wanted to write a guest post for my blog about her experience and everything she learned from it. 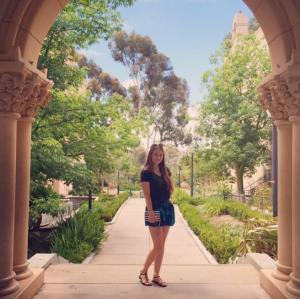 People always say that life moves too fast. I remember when I first started high school, my mom stated that the years would fly and, before I knew it, I would be a senior. I remember going on trips, and having people tell me to soak it all in and to make each experience fit into a pocket in the back of my mind. I remember running around in my backyard, the Texas humidity making my hair cling to my face as I ran after fireflies with my palms open to the night sky. These are the fleeting, beautiful, moments in life that we try and run after, hands always reaching for the heavens.

I remember all of this, and yet the day that still sticks out most in my mind was a day in April of 2007.  This seemingly harmless day started a phase in my life that I was not ever warned about. No one took my hands and sat me down, looking dead into my eyes as truths of the world spilled out. There was no warning sign for this day, or a lecture or a phrase that could comfort and ease my heart.

This was the day when my life in slow motion began.

Life in slow motion is a difficult, and indefinable, thing for some people. It is a span of days, or weeks, or months, that seem to be headed in a direction that has no clear destination. It can be a time of waiting – of being stagnant and wanting something wonderful in life to happen. It can be a time of heartbreak – of healing and hope that can be found around a corner that you just haven’t gotten around.

After going shopping with my family, my mom had noticed that there was a slight hunch to my back. I remember looking in the dressing room mirror at Macy’s, and realizing that one of my shoulders rose closer to my ear than the other, and how my hips didn’t sit right above my legs. I felt that fear creep into my chest, and for a brief moment I was plagued by a collection of thoughts and worries: What if I was injured? What if I looked like this the rest of my life? What if it got worse? What was wrong with me?

I had been checked for scoliosis before, but after a recommendation from my pediatrician to get x-rays, it became clear that this condition was not something I was going to put in the back of my mind. In fact, it made a home in all of my thoughts, and throughout my entire body. During gym class at school I found myself getting progressively more and more out of breath, and I found myself on more than one occasion with my head against the wall, trying to control the air going out of my lungs as my friends ran past me with ease. Standing for long periods of time became a nightmare, and when I would walk to band class with my French horn case, I felt the weight of my world shooting all up and down my back. This was no way of living; amongst all of the worries that ran through my head, this was the only fact.

On a day in April, I went to Scottish Rite Hospital for Children and was officially diagnosed with an aggressive case of scoliosis. The only “cure” for this condition was not exercises, or even a brace, but spinal implant surgery. My curvature, which was around 79 degrees, would only be getting worse as time went on and I grew. My doctor looked me in the eyes and told me that if I did not have this surgery, it could take up to twenty years off of my life.

Scoliosis is perhaps one of the most common conditions that people have, specifically in young girls who are developing and going through puberty. Some cases of scoliosis relate to other medical problems or birth conditions, while others (like mine) are idiopathic. In layman’s terms, that meant that the doctors had no idea why my body decided to grow like that – it just did. As a twelve-year-old girl, I found that diagnosis to be extremely frustrating; I already had the self image issues that many young people suffer from, but to have it confirmed by doctors on that day? The fact that my body was deforming “just because” was proof that the universe was conspiring against me.

The whole summer (during which my life was in that same slow motion) seemed to drag, and I found going to sleep each night became more and more difficult as the date of my surgery in July seventeenth inched closer and closer. I’ll never forget the night before my surgery, I had an anxiety attack so horribly in the shower that I gave myself a nosebleed. I had to be medicated that night because of my own fear.

I’ll leave out all of the details of my surgery (mostly because I’m afraid I might make some scientific inaccuracy), but it was, by the doctor’s standard, a success. I was in the hospital for around a week, and then I had around a month long recovery period at home. I needed help anywhere around my house if I wanted to sit down, lay down, or stand up, and walking was a task in itself. As a twelve year old girl longing for the independence that comes with almost being a teenager, having to rely on everyone humiliated me.

I wish I could say I learned to appreciate my surgery experience during my actual operation and recovery, but nope. There were nights I would be so frustrated because I couldn’t move, and the pain in my back was so strong it kept me awake. Sometimes I would be completely envious of all of my friends who were enjoying their summer, and were able to swim and ride their bike with ease. What made it even worse was my own anger with myself, and how I felt fearful still of the healing process. Even though my body was healing and regaining strength, I wanted it to speed up. I was afraid I would never feel like my “old self” again.

But who was my “old self”? I’ll tell you who she was. Someone who was ashamed of her body and who was constantly in pain. Someone who lived her days in fear, and who thought she would never be better, or beautiful, or healthy. Definitely someone who never thought she would undergo a surgery and come out victorious. But, in the end, I had to thank my “old self” for all that she had done for me. I can look back on all of my “old selves” that have been angry and fearful and ugly and beautiful and happy because they have taught me who to be the person that is typing this right now. I can look back and see a difference in myself, and to learn from that.

I am reminded of the words of the Serenity Prayer by scholar Reinhold Niebuhr, which is a prayer I hold near and dear to my heart:  God, grant me the serenity to accept the things I cannot change, the courage to change the things I can, and the wisdom to know the difference.

What does it mean to truly know the difference though? By looking back on my surgery, I think it’s in knowing that you have to be somewhere before you can get somewhere else. Whether you are in a slow motion life, or a fast moving life, you will always wind up a different person – full of wisdom, and a story. The scars and heartbreak and lessons that we carry and bear are the inspirations for another day, and we should accept these gifts as wonderful paradoxes:

It’s okay to have times when we are weak, because in the end we learn to be strong.

It’s okay to not have all the answers, because from the unknown comes questions, and imagination, and adventure.

It’s okay to be absolutely terrified, because then we learn how to believe in hope.

And I truly hope that I, and you, whoever is reading this, will continue to not only know the difference – but to be it.