This won’t be a proper ode because, let’s face it, I don’t have a poetic bone in my body, but Fangirl by Rainbow Rowell deserves nothing less than a Shakespearean sonnet. 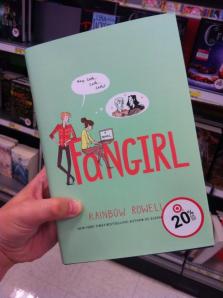 I’ve been wanting to read this book from the moment I first heard about it, coincidentally, here on WordPress.  I knew I would love it.  I just didn’t know how much.

This book, to me, was a love letter, not only to writers (I loved Professor Piper and the way she put writing fiction into perspective) but to anyone who has ever loved a book series so much that those places and characters, in fact, become real to them, in some instances, more real than real life.

Simon Snow is the Harry Potter of the Fangirl universe and the book included several passages from the books and fanfiction written by the protagonist, Cath.  I’ve got to be honest, if they were real, I would read those books in a heartbeat.  They sound awesome.  I found myself reading, not only to keep up with what was happening with Cath, her twin sister, and her potential love interest, but also to find out how the Simon Snow saga would end!

In the book, Cath and her twin sister, Wren, become immersed in the Simon Snow fandom after their mother walks out on their family.  For them, Simon Snow was an escape, a refuge.  It is revealed that Cath loves the fandom so much because for a moment, her reality stops.  She doesn’t have to live there.  I’ve never had something so horrible as a parent walking out happen to me, but my family did struggle financially for years.  I won’t go into it (I’ve already written it all down in the blog entry I posted above) except to say it made our home life miserable.

That’s where Harry Potter comes in.  Hogwarts became my own personal form of escape.  Instead of living in the horrible real world where our problems dictated our lives, I sought sanctuary in the world of Witchcraft and Wizardry.  While I was there, none of my stupid problems could touch me, because they didn’t exist.  Like Cath, I began reading and writing fanfiction (though I was not nearly as dedicated as she is), which eventually led to writing stories of my own.  I don’t list JK Rowling as one of my writing influences because I can’t even begin to compare myself to her, but the truth is, she’s the one who started it all.  I have other writing idols, but JK is the Queen.  We all know this.

Near the end of the book (I don’t think this is really a spoiler, but if you don’t want to read it, skip over this paragraph), Cath and Wren and a few of their friends attend the midnight release of the last Simon Snow book.  I’m not going to lie to you, but I got tears in my eyes.  The entire time I was reading, I was reliving my own time spent waiting for each of the Harry Potter books to be released.  It was real magic.  That moment the boxes come out, the moment they’re opened, the moment the first one is sold and everyone cheers.  If you’ve felt it, you know what it’s like.  These books, these characters, are so special and have such an impact on our lives.  That’s why I love writing and reading so much.  In some ways, it’s the only world I really know.

I’ve wondered my whole life when I would find my true place in the world.  It sounds so melodramatic and cliche, I know, but it’s something we all wonder.  I see people all around me who seem to know.  Some are meant for the world of business, others for law, some for medicine.  Artists, the writers and painters and sculptors and actors and musicians, I’ve come to believe, have no specific place in the world.  That’s why we feel compelled to create our own.  By doing so, I like to think we make the world a little bigger, give it a little something new each and every day.  And maybe, if we’re lucky, someone else will find a part of themselves in our creations.